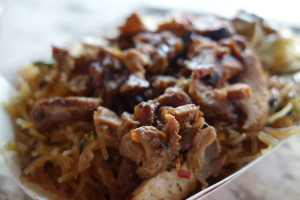 In a typical Thai restaurant in the US, one would expect to find Pad Thai and coconut curry, but these are from Bangkok and central Thailand. Southern Thailand tends to be the spiciest and has a lot of Malay influence. Masaman curry is an example of Thai food from the south.

In this Northern Thai-Lao-Burma/Southwest Yunnan region referred to as the Lanna Kingdom, whole-grain red, and purple rice are often used, along with typical white, and sweet sticky rice. BBQ meat is very popular, as is salad often containing meat and fresh chili. Varieties of pickled vegetables are served with every meal, as are greens stewed with such pickles. Meats are cured in the mild winter and eaten all year long. Yunnan adds yet another twist with the Muslim populations whose history is traced to the Middle East. In the 1200s Kubla Khan paid mercenaries from the Middle East to conquer the rugged Hill-Tribe regions of Yunnan. The steak seasoning Lona uses reflects this influence.

The philosophy guiding Thai cuisine involves balance. The focus is not on process or creative combinations diluting any specific flavor, but rather on the relationship between the following flavors: salt, sweet, sour, chili spice, and bitter. While Thai food, like Chinese food, incorporates stir-fry and noodle bowls, Thai cuisine also focuses on salads and grilled meats. Thai food also allows a lot of flexibility to each individual consumer. In Thailand, virtually every table holds a four-way sauce holder with salty, sweet, sour, and spicy flavors. Each consumer can add as he or she see fit.

Most of Thailand focuses heavily on dessert. Coconut and sugar are often the chief ingredients. However, this is less so in the Lanna Kingdom than in the south and central of Thailand or Bangkok. In villages in the Sipsongpanna, pineapple and purple glutenous rice are mixed to create a semi-sweet dessert on special occasions, but this is rare. Meals are more commonly followed by corn liquor for the grown-ups and fresh fruit for the kids, and sunflower seeds for all.

The Thai food in the Southwest of Yunnan is particularly interesting because of the mix of Chinese attention to method and Thai attention toward balance. Cuisine from Lona’s area focus both on bringing each food item into its peak, natural glory, while at the same time offering the variety that the salty-sweet-sour-spicy matrix can bring. The food has a natural country feel with a range of presentation from stir-fry to salad to soup and to pickles. We emulate this style in our restaurant. Our Giant Rice Paper Wrap offers the ultimate combination of both.